Urban Density, Innovation, and the Future of Senior Housing

In addition to becoming more densely populated with the likes of both Millenials and Baby Boomers, U.S. cities of the future will be centers of open innovation, according to a panelist at last month’s Housing for Tomorrow forum sponsored by The Atlantic. The forum, which took place in Washington, D.C., included a number of luminaries in the field of housing, including Vice President and Founding Director of the Metropolitan Policy Program at The Brookings Institution, Bruce Katz, who made the prediction about urban density.

Katz posits that urban areas of the United States are experiencing a “remarkable revaluing” thanks to the interplay of what Millennials and Baby Boomers want and what companies need. He described it as a restructuring of the U.S. economy from what has been a “closed innovation economy, where you had to be out in the middle of nowhere in science parks to keep your secrets secret, to an open innovation, network economy where proximity, density, vibrancy, vitality gets revalued by innovative companies.”

Katz clarified further: “Where once there were major farming companies that had their R & D facilities in the middle of nowhere, they are now moving back into cores of cities, next to MIT,” for 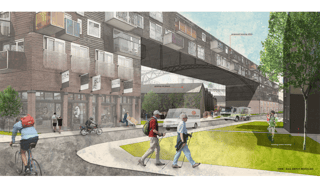 Companies want to be near advanced research institutions and hospital complexes, where ideas are being generated and there is speed-to-market, he says.

“It’s almost a collapse back into an innovation economy, where talented workers and innovative firms are going to the cores of metropolitan areas.” This, he asserts, will create “a radical change in the spacial geography of innovation.”

This idea seemed very well thought out to me, so I Googled the term “spacial geography of innovation” and found that, indeed, Katz and a colleague had authored a white paper titled, “The Rise of Innovation Districts,” which describes his concept in much more detail.

“America’s family structure has been altered by the simultaneous aging of the population and the tendency of young adults to delay marriage and have fewer children,” the report states.

MegaCities and the Death of Distance

Related to the Brookings report is a futures study from the Industrial Research Institute that examines, among other things, a scenario titled “Death of Distance vs. MegaCities,” which dovetails with the Brookings concept in that it advances the idea of an “open innovation framework,” similar to Katz’s assertion.

The study alleges that by 2038 cities will become major political forces in countries due to their embrace of smart technologies to manage transportation, energy, and waste.” But IRI’s crystal ball also finds that technology and connectivity will “make distance irrelevant” and enable scientists to work and teach at the “level of entire corporations or universities of the past.”

What does any of this have to do with aging or long term and post-acute care? For senior housing professionals, it’s valuable information about where future customers will choose to live, where their Millienial caregivers will also live and work, and where the innovation and technology to care for Baby Boomers will be generated.

If you happen to disagree with these predictions, all from highly regarded organizations, then at least consider it food for thought.