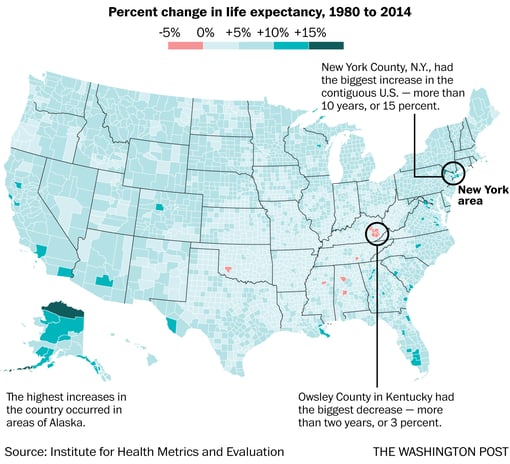 conspicuously in the other direction,” he notes in the article, citing a recent study in the Journal of the American Medical Association.

There are of course a number of reasons why this indicator is troubling, but as a disciple of the longevity economy, I find it particularly unsettling given the massive opportunities that aging services innovators have and continue to offer older adults and their families and loved ones.

According to the JAMA study, “much of the variation in life expectancy among counties can be explained by a combination of socioeconomic and race/ethnicity factors, behavioral and metabolic risk factors, and health care factors.” Reversing the trend of increasing disparities may be helped by “policy action targeting socioeconomic factors and behavioral and metabolic risk factors,” the authors point out.

In his article, Achenbach points to other research showing that the United States is failing to keep up with improvements in longevity seen in other affluent nations. “In 2013, researchers described what they called a ‘health advantage’ in the United States when compared to peer countries,” he writes, adding that more recent research has focused on “diseases of despair” that have contributed to a precipitous rise in death rates among midlife working-class whites.

I appreciate that Achenbach calls attention to this issue. And although I am not an epidemiologist, it seems to me that with all of the shiny new technology and innovations coming from our beloved field there should be some fundamental steps we can take to include everyone in our journey toward longevity and leveling these disparities.

That said, there are also plenty of opportunities for aging services entrepreneurs to take on this challenge with success.

If you want a focused approach, facilitated by experts in the longevity economy, as well as honest feedback, contact Quantum Age today.