Being lonely is not a new phenomenon, just think of all the pop songs with the word lonely in them or the melodramas that play out on television and film in which characters feel isolated or lost in their own world. When it comes to reality and the issues of loneliness among older adults, however, the repercussions are rife with physical and emotional costs and are not cured by pep talks or Hollywood happy endings. 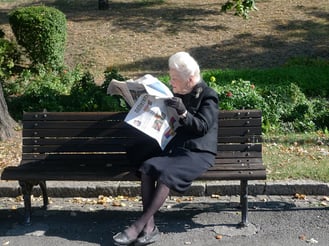 A new study from the IBM Institute for Business Value and the IBM Aging Strategic Initiative puts the human and economic price of loneliness in perspective as a way to not only deal with the psychic toll of being lonely, but also to offer ideas to help limit the problem.

IBM’s research revealed, among other things, that families and caregivers of those affected by loneliness leaves them feeling overwhelmed by the chore of filling in for the social gaps in their loved one’s or patient’s life, while at the same time ensuring their medical care is top priority.

“Frequent visits by older adults to their physicians for social interaction also strain limited health care resources by diverting them from other acute needs,” IBM found. Often, this process leads to what doctors call “somaticizing,” which is defined as a person who converts anxiety into physical symptoms. There is no underlying ailment to cure, as the interaction with a doctor is instead a cry for social interaction.

Even with the knowledge of what loneliness does to older adults, there are barriers to knowing how to proceed, the report says, running the gamut from the stigma associated with the condition, the lack of a screening process, and inaccurate assumptions prioritizing technology over the personal and customized.

But, there is always hope. And, many communities around the country and world are offering solutions like in England where postal workers are trained to do call and checks to see how isolated residents are doing, or in Japan where specific communities are being constructed to cater to more social interaction allowing residents to age in place.

Professor Hiroko Akiyama of the Institute of Gerontology at University of Tokyo said in the report that society needs an entire redesign in order to address loneliness. Akiyama also noted that there is tremendous potential to engage with new and existing industries, organizations, and agencies to create more holistic solutions that better support the aging population and help them maintain social connections. Examples include:

All told, it’s going to take a new kind of village to make loneliness less prevalent, the report implies. In the longevity economy, that village must include entities that can come together to find solutions.

If you want a focused approach to staying relevant in the longevity economy that is facilitated by experts in the senior living field, contact Quantum Age today.